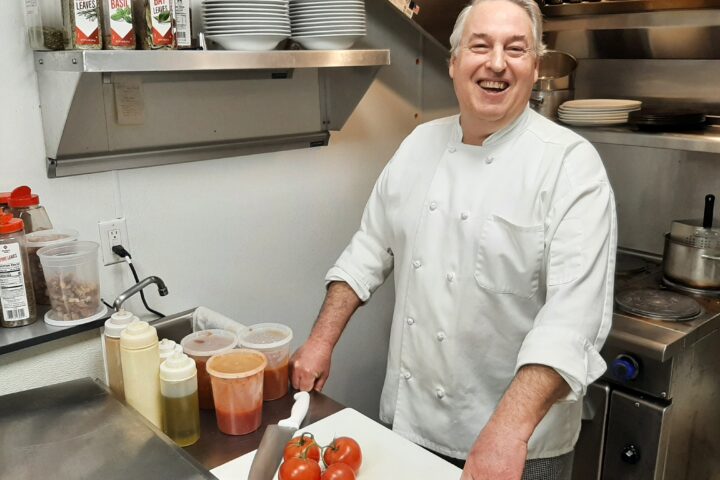 A local chef turns a jazz club into a dining haven

The old adage that you don’t eat in a jazz club is regularly denied by Jean Chambal to a lair in Tarryville devoted to the great American musical idiom. Here, the recipe for success includes a chef with a local clientele and fond memories of growing up in Rivertown.

Chambal, a seasoned caterer who ran the restaurant and ready meals emporium Good food in Briarcliff Manor for nearly a decade, was in charge of the food operation at Jazz Forum since 2020, and judging by the steady stream of dinners, salads and desserts leaving the small kitchen on a recent visit, music fans have been on to great food at the club.

Essentially, Chambal’s job as chef at the Jazz Forum encompasses the three days the club is open, Friday through Sunday, as well as preparations for Thursday, when he simmers bolognese sauce for fusilli or rolls all-beef. small plates of meatballs, two of the club’s signature dishes. Also, on Sunday nights when the club presents Brazilian jazz, Chambal is ahead to make feijoada (pronounced fay-jwah-dah), a stew of smoked sausage, pork, and beans that is Brazil’s national dish and served as a one-night special.

The rest of the limited menu of Jazz Forum focuses on the best of classic Italian favorite cuisine of the club’s owners, trumpet / flugelhorn Marc Morganelli and his wife and business partner, Ellen Prior—antipasti, burrata on salad, seasonal soups and charcuterie and cheese platters, as well as portions of vegetable farro, free-range chicken and roast salmon. Complementing the flavors for the sweet tooth are, of course, cannoli and ice cream, and Chambal’s unique versions on apple crisps and fudge brownies.

Asked what customers of the Jazz Forum seemed to like most about his cuisine, Chambal quickly exclaims: “They love everything! »

The real trick, notes Chambal, is getting all the orders in on a tight deadline. The club features music in two sets, at 7 p.m. and 9:30 p.m., and because each set typically lasts 75 to 90 minutes, drink and food service can’t drag on. On evenings when the house is full, nearly 100 people can be served at each set.

“Mark and Ellen have a real passion for food, so we bring in great produce, prepare it well, and deliver it as quickly as possible,” Chambal says. “It’s a challenge every weekend, but also very satisfying for me professionally. We know people don’t go to jazz clubs for the food. OK, but why not? The idea was to create a situation where people know they’ll have a great meal when they come here and judging by the reviews, that’s what we’ve achieved.

Chambal grew up in Elmsford, attended schools in Tarrytown and was friends with Charlie Breitenbachwhose family owned a bakery Dixon Street which is now the Jazz Forum site. After school, he visited Charlie at the bakery – “the smell of cakes and breads was amazing,” he said. At the age of 11, Chambal earned two dollars an hour washing dishes at the Washington Irving Boat Club. He graduated from Sleepy Hollow High School and moved to Austin, Texas, where he worked in different restaurants for 10 years, and followed the cooking management program Hyatt before returning to Tarrytown and work as a baker for a caterer. Abigail Kirsch for two years before opening a catering business, Custom Cuisine. Beginning in the early 1990s, Morganelli was a regular client of Chambal’s restaurant business for backstage broadcasts of the Music Hall concerts he presented through his non-profit organization Jazz Forum Arts.

Now 58, Chambal lives in Elmsford and spends hours running an organic farm in Congregation Sons of Israel at Briarcliff Manor, the seasonal source of much of the produce used at the Jazz Forum. He also runs an award-winning winery there. In his spare time, he races sailboats and also kayaks on the Hudson. Any evening at the Jazz Forum, Chambal can poke his head out of the kitchen and see former Good Food customers still hungry for his meals and familiar faces from Tarrytowns.

The Jazz Forum opened its doors in June 2017 and three former chefs had bitten the biscotti before Chambal signed on.

“John is so easy going and he cooks really well,” Prior said. “At first we weren’t there to be a restaurant, but now we want to celebrate what he does. The food he prepares is delicious. Prior added that it was Chambal’s idea to prepare dinners with the club’s unused inventory and donating them to the local food pantry during the Covid-19 pandemic lockdown.”We are so proud of John, we never want to lose him! And did you know he like to sing when he cooks?