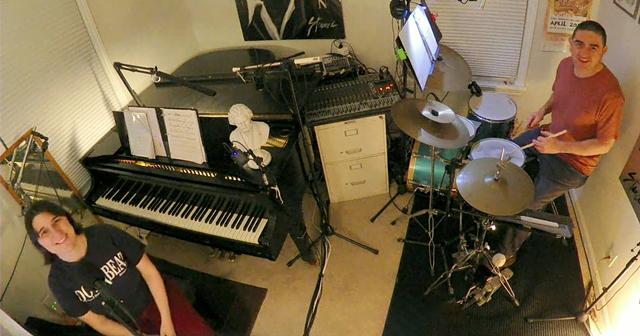 Ten years ago, last August, pianist Laura Dubin and drummer Antonio Guerrero first met, as they performed together in a jazz trio on a Holland America cruise ship. The Rochester-area couple, who married in 2014, have been playing together since that first gig, with no sign of stopping.

In fact, the duo’s performance schedule has literally been uninterrupted for a year. As the COVID-19 pandemic took hold in the United States, Dubin and Guerrero decided to play a 45-minute set live on March 16, 2020 – from the comfort of their own homes, enthusiastically delivering jazz to listeners all over the place. while maintaining the prescribed social distance.

Exactly 365 days of consecutive online concerts later – dubbed Laura and Antonio’s Virtual Jazz Club – the duo have been a constant source of live music at a time when such events were virtually non-existent. The DIY jazz series first anniversary concert takes place tonight at its usual time of 8:30 p.m., broadcast live on YouTube and Facebook. Archived performances can be found on Dubin’s website.

â€œWe didn’t really consciously state that we were going to do it every day for a year in a row, but we just didn’t want to stop doing it,â€ Dubin explains. After several weeks, it was really amazing to have him in the daily routine.

Guerrero, who calls the concerts â€œtherapeutic,â€ remembers the times when minor complications threatened to derail that night’s performance: a leak in the house that needed to be treated; an unstable internet connection; unwanted updates from YouTube and Facebook that could interfere with streaming.

Dubin says that on the toughest days, it was all the more important to play to raise their morale and that of their audience. Even on the holidays – Thanksgiving, Christmas, New Years Eve – the couple stuck to their six-song sets, performed entirely live and without any pre-recorded tracks.

The pace is definitely exhausting, with preparation that lasts all day. Dubin and Guerrero train together and individually, before a brief final test. After each concert, the couple reviews the performance of the evening and takes notes on what could be improved.

But Guerrero doesn’t see it as a chore. â€œWhen we have the opportunity to do it every day, it’s not difficult. It’s actually kind of a relief, â€he says.

Dubin and Guerrero believe they may have the longest consecutive performance streak of all jazz musicians – if not all musicians – and have contacted the Guinness Book of World Records for confirmation. They have not yet received a response. â€œObviously, they need proof, and we have it all on the Internet,â€ Dubin said with a chuckle.

As the series progressed, so did its production values. At the start of the Virtual Jazz Club, live broadcasts only included three camera angles, 720 pixel video resolution, and one microphone per instrument. There are now two microphones for the piano and four for the drums, Full HD quality at 1080 pixels and seven full camera angles with pictures in the picture, including close-ups of instruments that fans might not be able to. even get in a setting club.

â€œIt doesn’t matter where you are, if you’re not in one of the front rows it’s hard to see that close up,â€ Dubin says. â€œAnd so, our slogan that we like to say is, ‘Everyone has a front row seat in our club. “”

â€œIt was our goal from the start, not to just broadcast live on our phone or something,â€ she explains. â€œWe want them to really feel like they’re enjoying what they hear and see, and that it’s a cool experience to watch a livestream.

It’s one thing to hear jazz standards written by legends like Duke Ellington and Oscar Peterson performed with precision and style, and quite another to have a tactile sense of musicians playing in synchronicity. Viewers of the livestream can see Dubin’s fingers flying around the keyboard, as well as the piano’s hammers hitting the strings inside. They can see Guerrero’s feet setting the groove with the bass drum and the hi-hat.

While one-time or recurring donations can be made to musicians on Dubin’s website, concerts are free. The duo don’t want people to feel pressured to pay to experience music.

â€œWe really feel like we’re providing a service, and it’s nice to be able to do it for free, and let people take it whenever they want,â€ Dubin said.

Even with a year of uninterrupted jazz performances behind them and the prospects for upcoming live concerts becoming more real, Dubin and Guerrero have no plans to shut down the Virtual Jazz Club.

â€œWe don’t just see this as a way to hold ourselves back until the pandemic is over,â€ Dubin said. â€œIt’s been such an important part of our lifestyle now that we want to continue it even when or if we are able to perform in public places again. We still want to keep doing it.

Daniel J. Kushner is the artistic writer for CITY. He can be contacted at [email protected]