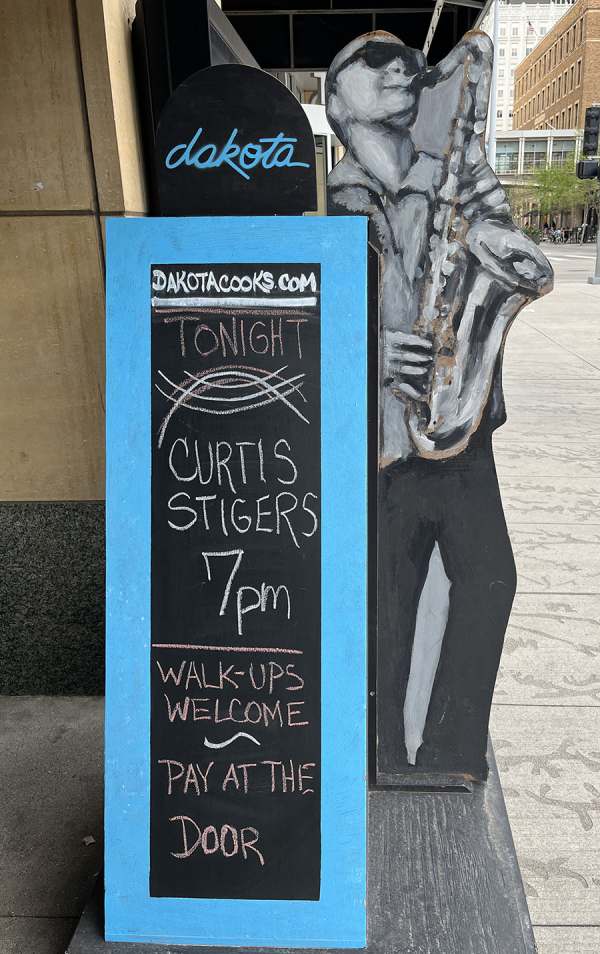 On the second night at the Dakota Jazz Club in Minneapolis on Saturday night, the American jazz singer and songwriter Curtis Tigers promised he wouldn’t talk about his four beloved dogs. Instead, he’ll be more focused and talk about the songs he chose to re-record for his new album. This life, which features new renditions and renditions of all of his hit songs. As he explained on stage, some of these songs are over 30 years old, and in that time he has grown as a musician. He now plays in a Jazz Quartet (Matthew on piano, Cliff on double bass, Paul on drums, and John on trumpets), he wants the song to grow with him too. He’s right, of course, these songs, such as “This Life” (aka the Son of Anarky theme song), have a different life, when heard in its new arrangement.

If you saw Curtis on Friday night, you got “Who’s That Writing” and The Beatles‘ song “I feel good”. For Saturday night, these songs were replaced by “Centerpiece” and Nick Lowe‘s “Lately I’ve been letting things slide”.

The funny thing about Nick Lowe is that for years Stigers thought “(What’s So Funny ’bout) Peace, Love and Understanding” was a Elvis Costello song. When he found out it was actually written by Lowe, he became a huge fan. This song on The bodyguard The soundtrack sold over 45 million copies… giving Lowe big money from royalties. So, yes, Lowe loves the Stigers.

Here’s the thing about a Curtis Stigers show, it’s both comedy/storytelling and jazz/pop live music. Every song has a story, and Stigers is more than happy to tell you about it, giving us insight into why and how these songs were important to him.

My favorite story of the evening was the birth of the song “Swingin’ Down at Tenth and Main”. It’s a great story about how the jazz pianist Harris Gene had retired and donated his grand piano to the Idanha Hotel in Boise, Idaho. A young Stigers would hang out in the hotel lobby to watch Harris perform with local musicians. Miner Stigers, if you’ll pardon the pun, would find enough courage to bring his clarinet (and later his saxophone) and play in those jam sessions.

A few years after Harris passed away, Stigers, who was traveling on a local airline, remembered those incredible times when he saw an article about the jazz festival that Harris started. He had the song in his head and he wrote “Swingin’ Down at Tenth and Main” on the plane.

Like I said, all these songs appearing This lifeavailable on Pandemic Poodle Records, has deep meaning for Curtis.