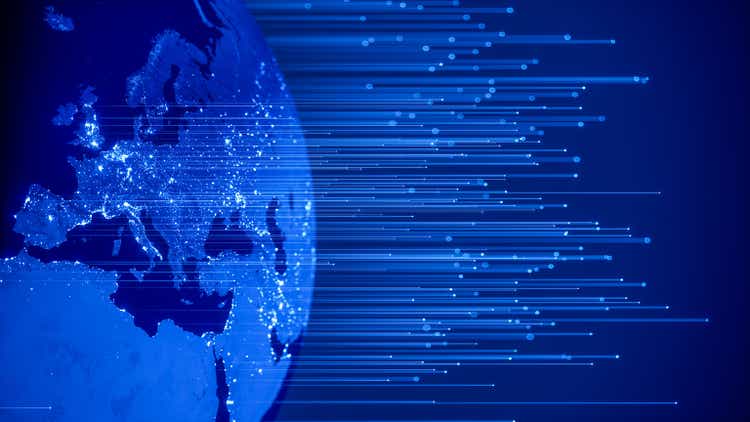 Deutsche Telekom AG (OTCQX:DTEGF) could see higher from here on continued revenue growth as well as increased postpaid mobile demand in the US – which the company is in a good position to capitalize thanks to its growing stake in T-Mobile.

In a previous October article, I made the argument that Deutsche Telekom has the potential to see significant long-term upside in the future, based on an increase in US revenues following the Sprint merger, as well as a strong cash position and higher growth in the Consumer segment.

We then saw the stock decline in the short term in the second half of 2021 before consolidating at a level of $18.26 at the time of writing.

The purpose of this article is to examine whether Deutsche Telekom might have a value advantage given the recent consolidation.

Based in Germany, Deutsche Telekom is the largest telecommunications provider in Europe in terms of turnover.

That being said, the company’s continued expansion into the United States through its growing acquisition of T-Mobile US (TMUS) has been notable.

Across Germany, the company has 99% LTE network coverage as well as 14.5 million broadband connections on its fixed network.

In this regard, the company’s European dominance along with its growing reach across the United States makes Deutsche Telekom virtually unique among its competitors in having a strong presence in both Europe and North America.

When we look at Deutsche Telekom’s recent balance sheet resultswe can see that the company’s cash-to-liability ratio has been on a downward trend – lower than seen in 2019 and 2020.

Deutsche Telekom expects capital expenditures to remain high over the next few years as the company upgrades its infrastructure to LTE and 5G standards, as well as a continued rollout of broadband infrastructure.

From this perspective, while we can expect cash levels to be lower than in previous years, investors might start to worry if the cash-to-liability ratio drops significantly. The company still has to meet its short-term debt obligations and investors will increasingly demand to see cash growth in the future as proof that the company’s investments in modernizing its telecommunications infrastructure are paying off.

If we consider that the earnings per share were “adjusted for special factors”, we can see that “the effects of deconsolidations, divestitures and acquisitions” resulted in a significant increase in costs, and the net profit would be significantly higher if not for such special factors.

In particular, Deutsche Telekom continuing to increase its stake in T-Mobile US to become a majority shareholder, we can expect special factors to also affect short-term net profit in 2022. However, Deutsche Telekom using this acquisition to become one of the major players in the US market telecommunications, my view is that investors will be prepared to tolerate a decline in net profit in the short to medium term as long as revenue and market share continue to show clear signs of growth.

While Deutsche Telekom had to invest heavily in upgrading its capital infrastructure, the company now has over 90% of 5G cover in Germany.

Additionally, while we have seen a decline in demand for contract moving arrangements across Europe over the past five years, we are seeing the opposite trend in the US.

In this regard, the fact that Deutsche Telekom has increased its stake in T-Mobile is quite encouraging – if we continue to see an increase in demand in the United States for mobile postpaid services, then Deutsche Telekom is in a position privileged to capitalize on this growing market thanks to T-Mobile.

Of course, the company still faces risks in that a continued decline in demand for contracts across Europe could effectively erase gains in the US market, and although postpaid demand has increased through 2020 , it has experienced somewhat stagnant growth over the past year.

For example, higher inflation may make postpaid options less attractive than prepaid ones. Verizon (VZ), one of T-Mobile’s main competitors in the United States, reported a loss of 36,000 postpaid telephone subscribers for the first quarter of 2022. If Deutsche Telekom’s upcoming quarterly results show a similar decline, it could make investors more worried about the stock. Additionally, while we have seen an increase in interest in broadband over the past two years following pandemic shutdowns, interest in broadband may reach a significant plateau this year as consumers start afresh. to travel and move.

Despite these risks, my overall view is that while the company has experienced increased costs due to particular factors, the core revenue streams of this business remain strong and we should expect this to result in significant growth. profits in the future.

To conclude, Deutsche Telekom has been under some growth pressure on the earnings front due to capital expenditures to grow its stake in T-Mobile as well as upgrade its existing infrastructure.

However, I believe that overall revenue continues to grow comfortably and that continued earnings growth in the future is plausible as the growth in postpaid customers in the US continues to accelerate. .

Editor’s Note: This article discusses one or more securities that do not trade on a major US exchange. Please be aware of the risks associated with these actions.