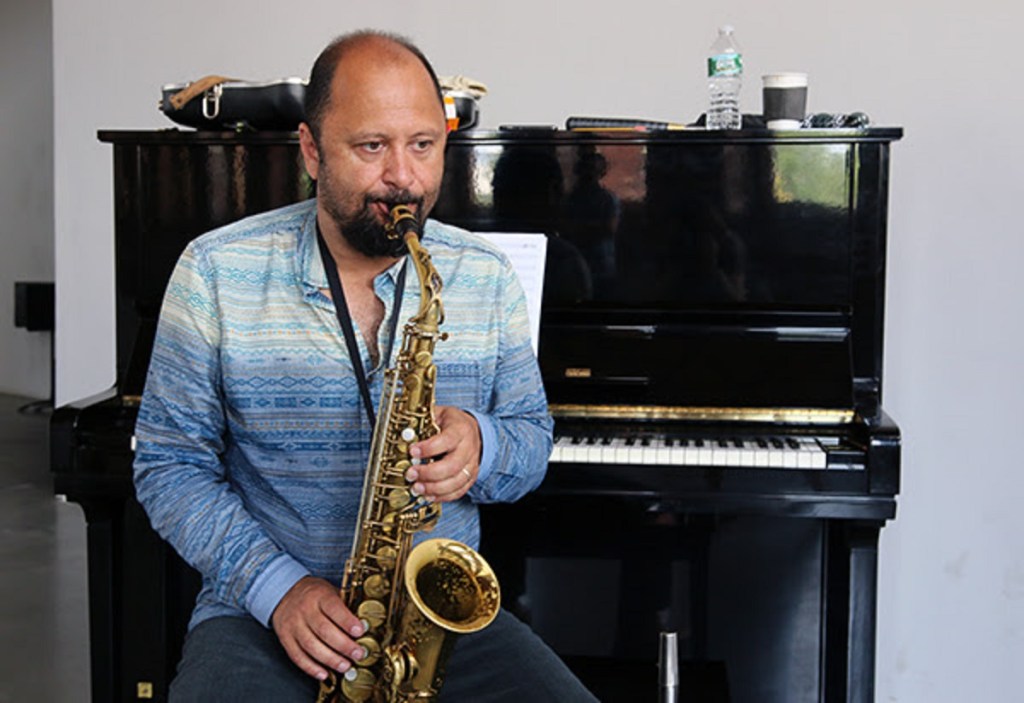 Taken in isolation, Hafez Modirzadeh’s new album “Facets” is a work of daring ambition that invites some of North America’s most famous improvisers into strange and unexplored musical terrain.

Featuring a series of compositions by Modirzadeh that pair the San Jose tenor saxophonist with Kris Davis, Craig Taborn and Tyshawn Sorey on a piano with eight strings down and the rest left in an even temper, the March 5 release on Pi Records sounds like a strange dreamy landscape seen through a swirling glass of water.

It has included several spontaneous improvisations for solo piano and pieces inspired by Bach (â€œGoldberg Variations No. 25â€) and Thelonious Monk (â€œPannonicaâ€ and â€œAsk Me Nowâ€). But the album focuses on Modirzadeh’s original â€œFacetsâ€, compositions that distill a harmonic vocabulary based on classic Persian modes that he has been exploring for around three decades.

A key contributor to Modirzadeh since the early 1990s, pianist Vijay Iyer writes in the cover notes that preparing the piano not only changes the eight strings, it triggers a transformation that “radically remodels all the internal resonances of the instrument. “.

The striking album art by his brother, Khayyam Modirzadeh, alludes to the elemental forces at work. Often meditative, the music does not particularly register as Persian or Oriental, which was on purpose.

â€œI was listening to Satie and Bill Evans and old music and Turkish music when I was writing these songs to get something that would sound beautiful,â€ Modirzadeh said. “The idea is that when played, it opens up the aesthetic, letting those eight alien tones breathe in the regular temperament.”

Although he only features three other players on â€œFacets,â€ Modirzadeh has explored the body of music with a range of players over the past three years, including Art Hirahara, Myra Melford, Dahveed Beherozi, and Dee Spencer, his alumnus. professor of music department. companion to the State of San Francisco. One of the first pianists to tackle music (and piano prepared by Modirzadeh) was San JosÃ© State Professor Gwendolyn Mok, an artist known as a master of Ravel’s luminous impressionism.

â€œHis performances are magnificent,â€ Modirzadeh said. â€œShe has such a precise touch. When Rebeca Mauleon played them, she applied her Latin side in a different way.

Their performances aren’t due out anytime soon, but Thollem McDonas, another pianist who has immersed himself in the music of Modirzadeh, has an album of “Facets” due out in the fall. Now recording only under his first name, Thollem was a student at San Jose State in the early 1990s, studying classical piano when he first heard Modirzadeh perform at Ajax, “and it was an experience. transformative for me, â€he said. “It changed the way I think about my relationship with music.”

A singular composer, improviser, singer-songwriter, songwriter and educator, Thollem jumped at the invitation to record new pieces by Modirzadeh, a project slated for release in the fall as part of the 25-series series. Astral Travel Records albums documenting the pianist’s traveling musical journey. . Even for a fearless sound investigator like Thollem, â€œFacetsâ€ offered a refreshing approach.

â€œI feel like it opens up to a universe that comes from the mind and soul of Hafez,â€ he said. â€œThe intonation itself has these wonderful intervals that breathe wild and amazing ways. As I progress through the compositions, the challenge is one of expectations, what to expect and what it looks like, and my ideas about beauty.

Questioning expectations about the nature of sound has been at the center of Modirzadeh’s creative process for nearly three decades. “Facets” is the third work in a trilogy that he released on Pi Records. The series began in 2010 â€œRadif Suiteâ€, a Middle Eastern jazz encounter between Modirzadeh and Iraqi-American trumpeter Amir ElSaffar, a player steeped in Arab fashions.

Modirzadeh continued in 2012 with â€œPost-Chromodal Out! Â», A kinetic quintet session with ElSaffar, bassist Ken Filiano, drummer Royal Hartigan and Vijay Iyer on retuned piano. By showcasing the retuned piano, â€œFacetsâ€ lays bare the scope of Modirzadeh’s revolutionary ambition, who seeks to overthrow the domination of equal temperament.

â€œThis is the culmination of almost 40 years, a mission to convey the idea that the standardized temperament of the piano carries an unbalanced weight that creates a system of values â€‹â€‹that limits the discovery of more personal tuning possibilities. By retuning the piano, musicians are free to explore all tonal possibilities.