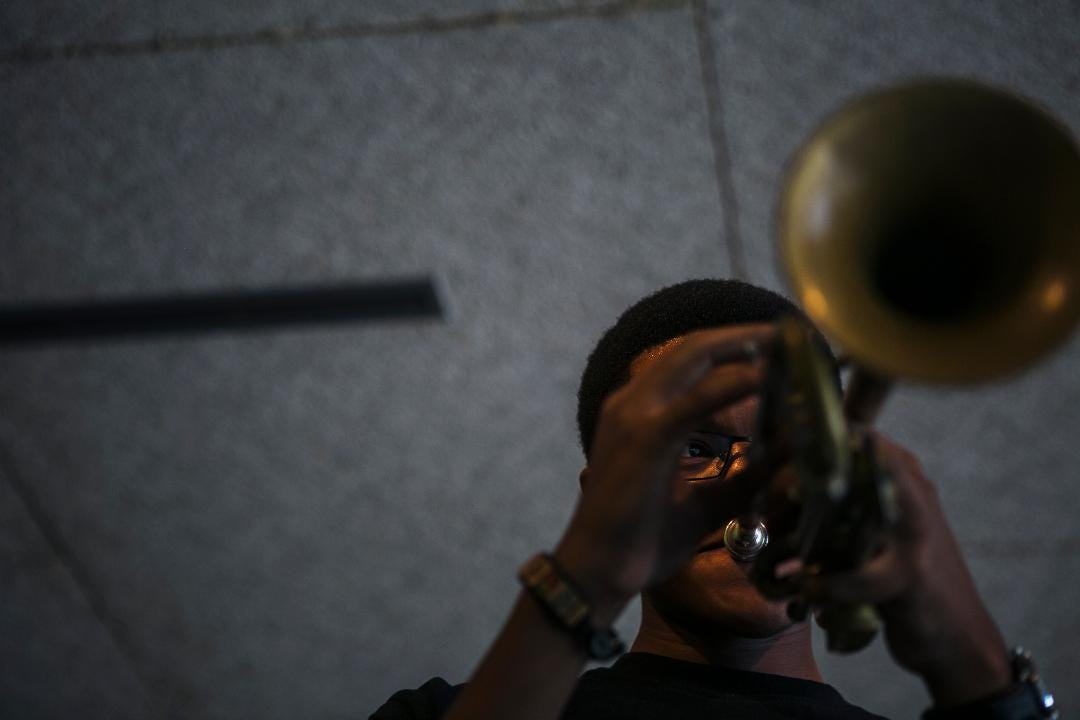 Jazz music unites young and old in a single camp

The melodic energy of trumpets, bass guitars, pianos, saxophones and drums reverberated throughout Visible Music College recently, as teenage jazz musicians from across Shelby County honed their skills to make revive a genre in decline.

But much of that energy did not come from young people.

It comes from an 82-year-old woman who loves jazz and classical music not only for the way it reminds her of her youth, but also for its power to help young people grow intellectually and creatively.

“For me, it’s the kids. I think every young person deserves to be exposed to every opportunity, and I love it when that happens in music…

“I believe jazz is the most intellectually challenging genre of music, so for these kids to get on stage and not know what the other person is going to be able to do and respond to that, that’s fine. I want every opportunity for these kids.

Throughout the weeks of camp, Christensen was present – ​​observing the musicians, absorbing the sounds and cheering them on. She talks about young people with the breathlessness of a teenager getting out of his first car for his first trip; charged with the thrill of excitement and the optimism of expectation.

“Ms. Barbara lives in the moment of what’s going on right now,” said Erica Cain, whose 16-year-old son Tyler plays bass guitar. of camp and building these new legends, well, look at his eyes! Look at that sparkle!

And Christensen’s excitement infected everyone around her.

Christensen lives at Trezevant Manor – a retirement community where campers will perform a concert tonight [July 14]. She is the musical director there. When she met Lee, she was moved by his stories of young musicians struggling to raise enough money to pursue their education and their passion.

They started working together not only to bring young jazz and classical musicians there to perform for the residents, but also to see what they could do to help them further their careers.

So far it works.

A Trezevant resident donated $10,000 to the jazz camp, while others donated as well. Memphis Music Initiative donated $7,000 and Visible donated the space, Christensen said.

“I can’t begin to tell you how many people have donated money,” Christensen said. “Last Friday, for example, someone came and wrote a check to help Basil [Basil Alter, a violinist] go to Italy…

“They care about jazz…they show up on their own and the interaction is amazing.”

In virtually every room where student musicians played their instruments, an elderly or middle-aged musician played with them, giving them directions and suggestions.

And while playing jazz inspires young people like Tyler, who lives in Midtown, and Ljuliana Thomas, 17, of South Memphis, a pianist, to expand their minds and think outside the box, their experiences with older fans make them more help build bridges between generations.

“I love him so much,” Ljuliana said of Christensen. “She’s such a great personality and she’s a huge supporter of this program.”

For example, a resident of Trezevant, who is incapacitated by a stroke on one side and is in a wheelchair, recently sat down next to one of the young pianists and played a tune with him with one hand.

Sometimes, says Christensen, she even plays the harp with them.

It’s also a reminder that for these seniors, it’s not enough to pay these young people to entertain them on weekends, but to invest in their future.

A future made possible through music that connects people to their past.

Why is there so little room for women in jazz music?