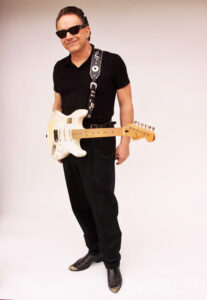 A promotional photo of Jimmie Vaughan, who sold out at the Dakota Jazz Club in Minneapolis on Tuesday night.

Jimmie Vaughan’s website proclaims that “he has dedicated his life to ensuring that the blues not only stays alive, but remains vibrant and an inspiration to all who listen to it.” Indeed, at 70 years old, Vaughan remains a tireless and relentless live musician. Right after his performance of over two hours at the Dakota last night, Vaughand and his band “Tilt-a-Whirl” hit the road for a concert in Omaha tonight. Tomorrow they will be in Kansas City for another performance.

It’s a schedule that would tire normal old mortals halfway through Vaughan’s age, but it doesn’t seem to have slowed it down in the slightest.

It was a packed stage at the Dakota Jazz Club on Tuesday night, with Vaughan receiving the usual superb support from Mike Flanigin on vocals on the Hammond B3 organ, with excellent work from Doug James on sax, Mike Rinta on trombone, Billy Pitman on rhythm guitar, Billy Horton on double bass and Jason Corbiere on drums. Many songs from the evening are from Vaughan’s Grammy-nominated album Baby please come home (2019) and its energetic predecessor Live at C-Boy’s (2017).

For many, Vaughan will be forever associated with his 1970s and 1980s band The Fabulous Thunderbirds. There were, in fact, a few selections from Thundberbirds: â€œScratch My Backâ€ and â€œThe Crawlâ€. Others may remember Vaughan primarily as the older brother of the Rock and Roll Hall of Famer Stevie Ray Vaughan, who died in a helicopter crash in 1990. Jimmie played his brother Stevie’s classic “Texas Flood” in the middle of the set, and the little brother also appeared as the inspiration for “Six Strings Down” (“Heaven done called / Another blues-stringer back home”). However, most of the evening was spent partying and not mourning.

You don’t go to a Jimmie Vaughan concert for the lyrics of the song – there are instrumentals mixed in with tracks like “Boom Bapa Boom”, “Silly Dilly Woman” and “Do the Mamma Jamma”. We come to hear Vaughan for the blues on guitar and organ; the evening featured covers of classics by Gatemouth Brown and Slide Hampton. We’re also coming out for honky tonk dance music, which left the Dakota crowd sold out wishing there was no dance floor on site.

The night also featured a special bonus: Towards the end of the set, Jimmie Vaughan invited Sue Foley (a hot pink top that stood out against the Texas blues outfits all around) on stage, to perform “Jimmie Lee” with the band. Vaughan added a little whimsy to the evening; on “Scratch My Back” he repeatedly made his guitar sound like a chicken. He added: “I hope you don’t try to be serious tonight.”

At another point in the evening, Vaughan remarked to the audience, â€œYou might think I’m sad because I’m singing all these sad songs, but I’m a really happy guy! The whole evening seemed to confirm it. Jimmie Vaughan clearly enjoyed playing his songs, performing with his band, bringing a little Texan warmth to a fall stage in Minneapolis.

reopening of clubs and novelties