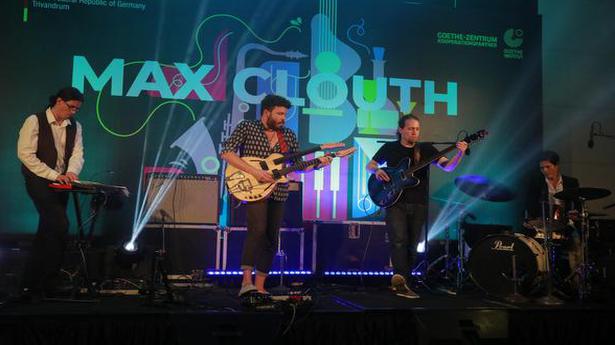 The members of the Max Clouth Clan are busy preparing their instruments for the evening concert. Although they are a German band whose music is rooted in jazz, they also contain strains of Indian, rock, electronic and even West Asian music.

â€œEach of us enjoys various genres of music and this is reflected in our work. For example, Martin likes electronic music, while Markus likes West Asian music. Our music ultimately develops organically from our interactions and Indian music has a predominance in our work. I try to create contemporary instrumental music that transforms elements of classical Indian music into Western stylistics, especially European jazz, â€says Max Clouth as he takes a coffee break with his band mates Winfried Rimbach-Sator , Markus Wach and Martin Standke.

The four-year-old band leader, Max’s love affair with India began after listening to John McLaughlin’s band, the Mahavishnu Orchestra, which fused electric jazz and rock with influences Oriental and Indian. Fascinated by Indian rhythms, the guitarist from Frankfurt spent four years training in classical music with the famous tabla and sitarist Nayan Ghosh. To capture the sounds of an Indian sarod on his guitar, Max asked a friend of his to make him a double neck guitar.

Back in Frankfurt after learning â€œall about ragas and talasâ€ he decided to start a band that would play music reflecting his experiences in India. â€œBut, since I was far from Germany for so many years, I didn’t know any local musician. So I decided to try out the random numbers of musicians I looked up in a phone book. Martin was the first person I called, â€says Max.

Martin smiles when he says that although his knowledge of Indian music was limited at the time, he was captivated by Max’s idea of â€‹â€‹infusing Indian flavors with jazz.

All the members of the group are in their thirties. Although their interests in music may differ, it is their love for it that binds them together. â€œAlso, the fact that we are almost always together when we travel to various places with our music. The experiences that we live and share while traveling tend to bring you closer, â€explains Martin.

Music festivals, they say, have helped them popularize their works. â€œMusic festivals not only attract crowds, but they also help us reach a wider audience, especially young people. The success of an individual concert depends on the organizers and how they market the event, â€says Markus.

The band is releasing their second album, ‘Kamaloka’, which features jazz rock with an Indian twist. The members describe the album as being similar to a road movie where the protagonists travel to distant lands and engage with its people and land. â€œWe have collaborated with Indian musicians such as Varijashree Venugopal, Sriparna Nandi and Ishaan Ghosh for ‘Kamaloka’. For us as artists, combining the two worlds is exciting, â€says Markus.

Max Clouth Clan works on their music as a team. â€œFor example, I had the idea of â€‹â€‹a ballad in my head, a soft and melodic piece. However, as we started jamming, with everyone’s ideas pouring in, we came out with an energetic track. This is why everyone contributes significantly to the final shape of the parts, â€explains Max.

According to Max, ‘Kamaloka’ shows their progress as a group.

â€œI think we were still trying to find our voice in our first album ‘Return Flight’. But then, I think, every recording shows his growth as an artist. I’m sure in our next album our music will sound different as we continue to discover our voice. The (recent) tour will deepen our influences and the connection with India, its people and its musicians. This will hopefully be reflected in the songs and the sound of our next album as well, â€says Max.

Max Clouth Clan was in the city as part of a tour of India, courtesy of the Goethe-Zentrum.

News, gossip and dates from the North East jazz scene