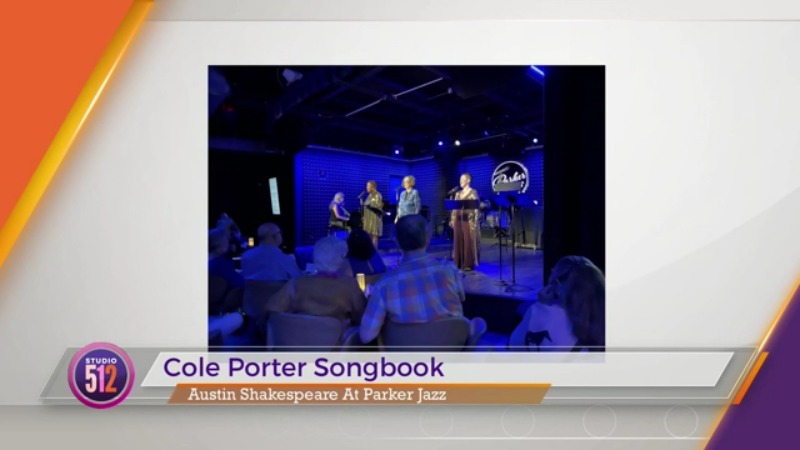 austin shakespeare celebrates the music and lyrics of Cole Porter with two performances of the cabaret-style “Cole Porter Songbook” on Sunday, August 28 at 5:30 p.m. and 7:30 p.m. at the Parker Jazz Club in downtown Austin.

Four singers will be hosted by award-winning actor, Marc Pouhé. Musical director Lyn Koenning will be on the piano with singers: Kara Bliss, Paul Sanchez, Corinna Browning and Quincy Kuykendall.

Marc Pouhé is the winner of several Austin Critics’ Table Awards and recipient of the John Bustin Award for his remarkable versatility. He was recognized by The Austin Chronicle as Austin’s “Best Classic Leading Man”. Marc holds a BA in Electronic Media and Theater from Texas State University and serves as Chairman of the Board of Austin Shakespeare.

Austin Shakespeare started in 1984 with Free Shakespeare in Zilker Park and has been a staple of Austin theater ever since. Originally subsidized by the city of Austin, it quickly developed its own sources of funding, establishing itself as one of central Texas’ leading theater companies.

In addition to Free Shakespeare in the Park, the company presents Shakespeare and other classic works as well as contemporary playwrights whose work reflects classical sensibilities at the Rollins Theater at the Long Center and the Curtain Theater (one of a dozen replicas Elizabethans in the United States). ).

Currently, the company produces 3-4 annual productions under contract with Equity as well as non-unionized productions throughout the season. This includes fully produced stage readings, an annual collaboration with the Austin Chamber Music Festival, collaborations with other arts organizations, and local and national artists. The company promotes a policy of inclusion and diversity in all areas of corporate life.

Kris Kimura is an Austin-based woodwind specialist, singer, composer, arranger, bandleader and jazz club owner. He studied music at the University of North Texas and Texas State University, and is the protege of the late woodwind master Tony Campise. For more than two decades, in addition to fronting his own bands, Kris has been a fixture on the Central Texas scene.

In early 2018, Kris opened the doors to Parker Jazz Club, a world-class basement lounge clearly designed by a musician for musicians. “There are rooms that cater to music and musicians. However, very few pieces are designed and literally BUILT for it,” says famed Austin musician Alex Marrero. “Every microphone, cable, speaker, wire, cabinet, table and chair has been meticulously hand-picked to serve the music. I’ve never seen anything like it in town for a room this size. The reason is that it didn’t exist before the Parker Jazz Club opened.

Cole Porterfull Cole Albert Porter(born June 9, 1891, Peru, IndianaUnited States – died October 15, 1964, santa monicaCalifornia), American composer and lyricist who brought a worldly boost to America musical and who embodied in his life the sophistication of his songs.

A new era of greed begins in college football