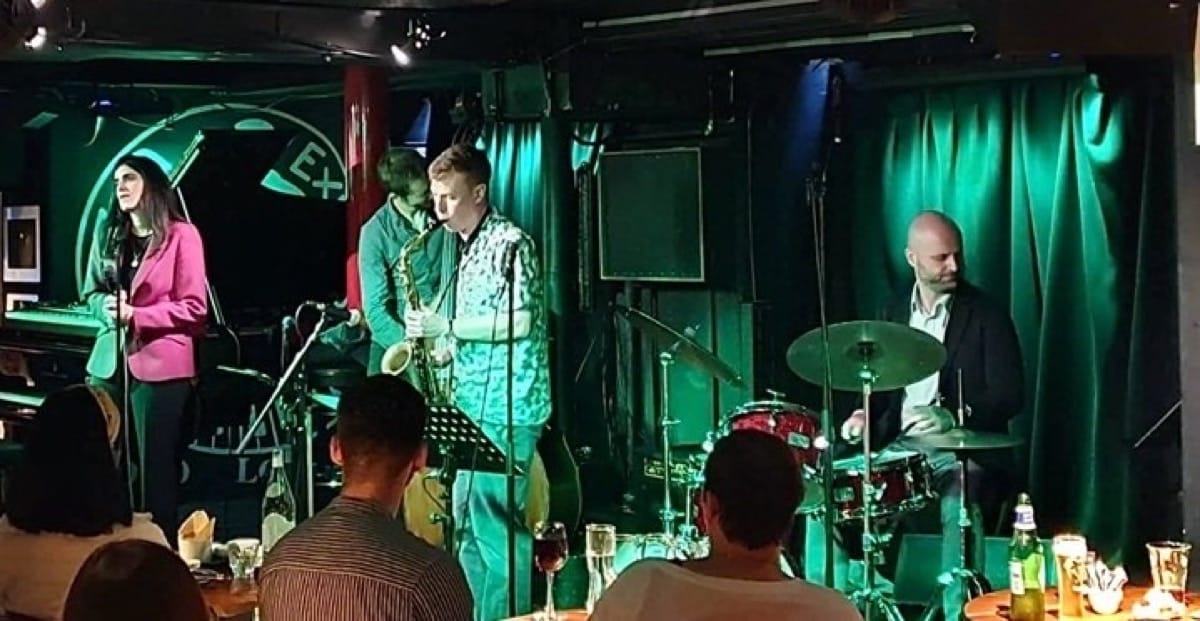 Dave Kelly is cited in the Guardian saying, “I can’t think of another alto saxophonist with a sound quite like Sam Braysher’s”. On that date, Braysher brought his trio with Tom Farmer (b) and Josh Morrison (d) alongside special guest Sara Dowling (v) to the Pizza Express Jazz Club, Soho, for an afternoon of accessible jazz. The concert was held to promote his second album Little Lady Dance, Little Man Dance.

I first met Braysher in a jazz history class organized by the Guildhall School of Music and Drama where he studied. We discussed the Great American Songbook as well as his passion for the old repertoire. This knowledge and affection for the art form was presented as a whole between the pieces.

The live music started with Heart and Soul, a song by Hoagy Carmichael that Braysher had completely overhauled. This was followed by a tune called Shall We Dance, his lyrics forming the inspiration for the title of his second album.

Another notable feature was Little White Lies, which is said to be John Lennon’s most beloved song. While Farmer took on a solo, Braysher was never afraid to act as a harmony-enhancing tuning instrument in the absence of a piano or guitar.

At the start of the second set, we met the fabulous Sara Dowling, who described Braysher as an “old soul”; one can only assume that she was referring to her musical tastes. Her voice filled the whole room and captured the attention of the crowd. Dowling reminded me of female singers such as Dinah Washington and Dakota Staton with their prominent vibrato and wide range. Dowling’s confident and well-presented personality seemed to work well against Braysher’s unassuming character on stage.

Overall, the leadership of the Braysher band was clearly evident through their saxophone playing and body language. Each solo has been carefully executed. The fact that this was a trio arrangement meant that Braysher needed to expand his solos, but his creativity came naturally. The energy he brought to the performance was well received by everyone in the audience, and it’s just me describing his groovy summer shirt.