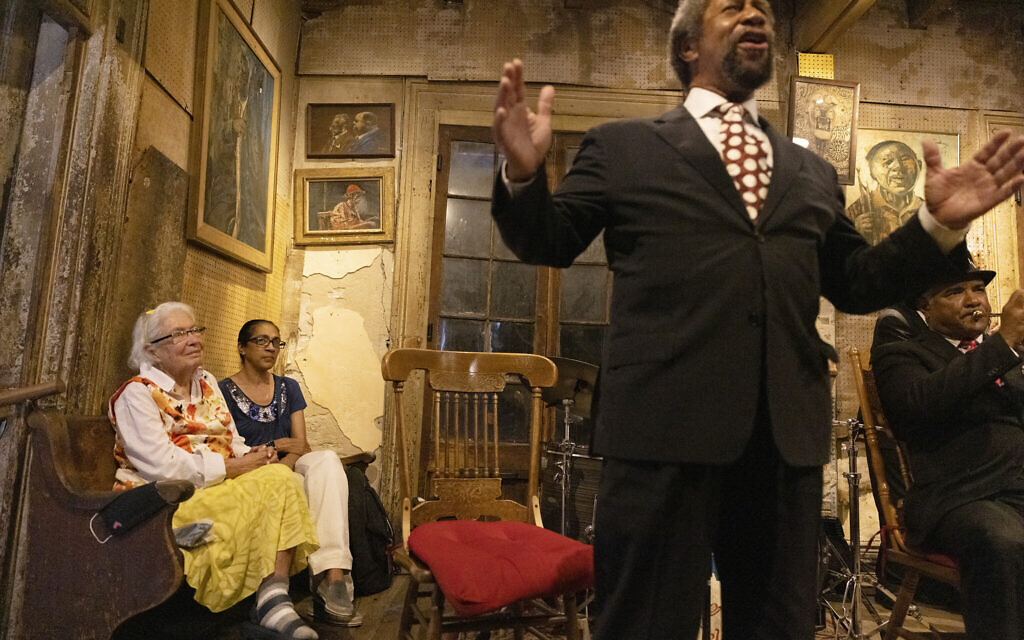 JTA — Sandra Jaffe, a Jewish woman who, along with her husband, ran one of New Orleans’ most vaunted jazz clubs for decades and joined the club before segregation ended, died this month last at age 83.

Jaffe and her husband, Allan, were considered pioneers and protectors of jazz in the city that gave birth to the genre, although they landed in the city of Philadelphia as the musical style was threatened by new forms like rock and roll. Their club, Preservation Hall, has hosted well-known jazz musicians. The Preservation Hall Jazz Band, the club’s touring band, has recorded with major artists such as Pete Seeger, Tom Waits and Louis Armstrong.

Jaffe was born Sandra Smolen in Philadelphia in 1938 to Jewish parents who immigrated to the United States from Ukraine. She graduated from Harcum College in 1938 and married Allan Jaffe in 1960. Returning from their honeymoon in Mexico, the couple stopped in New Orleans, where they strolled through an art gallery to hear a band playing jazz. The couple were fascinated by the music and decided to stay a few more days to hear the band play again.

“On their way back to Philadelphia, they stopped in New Orleans and, like others before and after, found themselves swept up in beauty, romance, excitement, mystery, freedom, ‘history, unsettled business and city charm’, the Jaffes’ son wrote in an obituary posted on the Preservation Hall website.

When they visited the gallery a few days later, owner Larry Borenstein told the couple he was moving the nearby gallery and offered them the space for $400 a month. Although they had no experience running a club — and despite Sandra’s parents expecting the couple to return to Philadelphia — they decided to lease the space and opened Preservation Hall in 1961.

“We didn’t come to New Orleans to start a business, or have Preservation Hall, or record the music,” Sandra told Vanity Fair in 2011. “We just came to hear it.”

After starting the club together, the Jaffes had their first son, Russell, in 1969, after which Sandra stopped working. She would not return to work at the club until 1987, when Allan died of melanoma aged 51. Their second son, Ben, returned to work at the club after graduating from university in 1993.

In the decades since the hall’s inception, countless locals and tourists have flocked to the small hall to hear a rotating cast of musicians. Spectators line up outside to snag one of the banquettes inside the rustic interior where musicians and audience share an intimacy more akin to a living room than a performance hall.

Children are often seated on the floor directly in front of the musicians, who alternate between playing music and telling jazz stories or answering questions from the audience. Crumbling plaster walls, worn hardwood floors, and the haphazard assortment of paintings add to the simple, wholesome vibe and provide a stark contrast to the atmosphere of daiquiri and flashing neon lights on Bourbon Street a few houses over. far.

Sandra Jaffe, who with her husband, Allan, has owned and operated Preservation Hall since the early 1960s, stands with her son, Ben, as they welcome guests to the first show at the historic venue in 15 months since the coronavirus lockdown, Thursday, June 10, 2021, in New Orleans. The guest, right, crosses his fingers in the hope that the music and touring will be back for good. (Chris Granger/The Times-Picayune/The Advocate via AP)

According to the obituary posted on the Preservation Hall website, the club was New Orleans’ first integrated hall, in defiance of Jim Crow laws still in effect before the passage of the 1964 Civil Rights Act. Sandy Jaffe was arrested once for violating segregation laws still in effect at the time.

Addressing the Crescent Jewish Timesa local Jewish newspaper in New Orleans, about his involvement in a local Shabbat jazz festival in 2015, Ben Jaffe said his mother saw music as a way to bring communities together and that his parents, both from of observant Jewish communities, valued the continuation of Jewish traditions.

“In many ways, it’s a continuation of my parents’ vision to unite communities through music,” he said.

Ben recalled his bar mitzvah at one of the local synagogues as “one of the most diverse bar mitzvahs ever attended for services in New Orleans” due to all the jazz musicians in attendance.

“We spent a lot of time in churches performing for different functions,” Ben Jaffe told the Baltimore Jewish Times in 2013. “I think in New Orleans it was just a natural extension of [my parents’] Jewishness [by them] get involved in the African-American community.

Like other concert halls in New Orleans, the Preservation Hall was closed due to the coronavirus pandemic. It reopened in June but is now closed again for a few days amid a nationwide resurgence of the virus.

Sandra Jaffe was on hand for the reopening in June, hugging local musicians who showed up to play.

AP contributed to this report

If so, we have a request.

Every day, our journalists aim to keep you up to date with the most important developments that deserve your attention. Millions of people rely on ToI for fast, fair and free coverage of Israel and the Jewish world.

We care about Israel – and we know you do too. So today we have a question: show your appreciation for our work by join the Times of Israel communityan exclusive group for readers like you who appreciate and financially support our work.

yes i will give

yes i will give

Already a member? Log in to stop seeing this

You are a dedicated reader

We’re really glad you read X Articles from The Times of Israel over the past month.

That’s why we started The Times of Israel ten years ago – to provide discerning readers like you with must-read coverage of Israel and the Jewish world.

So now we have a request. Unlike other media, we don’t have a paywall in place. But since the journalism we do is expensive, we invite readers to whom The Times of Israel has become important to help support our work by joining The Times of Israel community.

For just $6 a month, you can help support our quality journalism while benefiting from The Times of Israel WITHOUT ADVERTISINGas well as access Exclusive Content only available to members of the Times of Israel community.

Thank you,
David Horovitz, founding editor of The Times of Israel

Already a member? Log in to stop seeing this