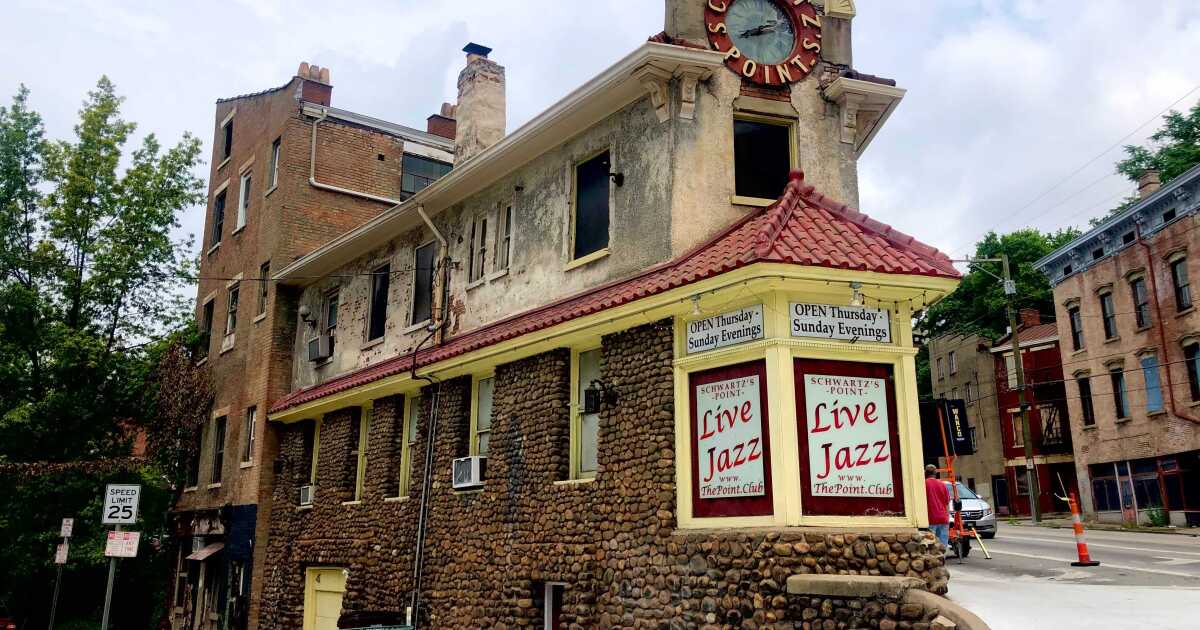 CINCINNATI – Zarleen Watts didn’t know how to turn on the lights of the jazz club she inherited after her father died.

â€œI used to just go visit and take friends over there, like, ‘Hey, you wanna see something really cool?’â€ Watts said.

Watts’ father Ed Moss opened Schwartz’s Point Jazz Club in the cobblestone space under his apartment in Over-the-Rhine in 1998.

â€œReally, he started out to have a place to play,â€ Watts said. â€œHe was a really good musician. At first it was just lights. If the lights outside were green, you would come in and you had to sort of know someone to go. It has a mystique. . “

The building stands out as the focal point of a five-lane intersection at Vine Street and East McMicken Avenue, but Moss ran the club like a sweatshop under boarded up windows for nearly 10 years.

â€œHe didn’t have all the things you’re supposed to have,â€ Watts said. “He just invited people in, he put a donation jar for the people who were playing, and then finally I think the liquor board was like, you know, ‘Hey, you can’t do that.’ “

After eight more years of operation – this time legally – the club faced another closure in 2016 when Moss found himself ill in hospital. He passed away in September. It was then that Watts, who studied librarianship and doesn’t play an instrument, found herself running a jazz club where she had never worked before.

â€œI took about a year to clean up the place and work on it and get loans to fix the roof and things like that, and then I opened myself in October 2017,â€ Watts said.

Contrary to the mundane mystique of his father’s reign as owner, Watts wanted to spell out outside the building what you’ll find inside: live jazz, Thursday through Sunday.

She launched an online newsletter for fans and expanded the drink menu to include herbal cocktails made with ingredients grown in her own garden.

The club, while iconic, is not a money generator for Watts, who said pandemic restrictions made it impossible to operate a club containing only 45 people.

â€œWith limits of 25% or even 30%, there’s just no way to pay musicians,â€ Watts said. â€œWe have to have a decent sized crowd just to break even. We got a few PPP loans, not a lot of money, but we tried to make it last. That was the only reason we were able to. pay the liquor license fee. “

Watts said she had tried to apply for a grant for closed sites, but the club would not be eligible because it does not pay an outside booking agent. She felt like they were being punished for being such a small room. Bartenders and musicians aside, Watts is the whole business, working 60 hours a week on top of his day job.

â€œI never got paid there so I have to work some other job,â€ she said. “It took a lot of work, but it’s important for the community, for the jazz community.”

Like Watts, the jazz community isn’t getting richer from Schwartz’s Point either, but pianist Andrew Haug doesn’t care.

â€œNobody likes to play there for money,â€ he laughed. ” It’s courageous. He has a lot of character. It’s not just your average jazz club when you walk in.

Watts said his father created a sound void in the small club by lining the walls with antique rugs and artwork to create a unique acoustic experience, like playing in someone’s living room.

â€œIt’s a small space and they have a lot of rugs and stuff on the walls,â€ Haug said. â€œEspecially when it’s a packed room, everything kind of absorbs sound. So you can hear, there is no noise in the room, you can hear directly from the instruments. most intimate space I’ve played in Cincinnati. “

Although Watts is not a musician, growing up on the stage made her musical. She said she would fall asleep when she was little on a bench listening to live jazz.

â€œI have a real, almost innate feeling for music listening to this,â€ she said. “I couldn’t really explain what it is, but I can hear it when it’s right, you know?” I’m very careful who I play there because I think it’s important because people know when they’re coming there, it’s going to be jazz, like real jazz. “

After a 15-month shutdown from COVID-19, Watts is set to bring live jazz back Friday night to all five corners of OTR. But just like when she found herself taking the reins of her father’s club in 2016, she faced an uphill battle to get the club back on its feet.

“We run out of money a lot of time, so we have to do something,” she said. “I asked the musicians who play there if they could put on a few shows just to get us started. I’m going to do a grand opening.”

Six jazz bands have agreed to perform for free to help lift the club’s hiatus, including Hague’s trio, On A Limb.

â€œThe community love Zarleen and love to play there for who she is and what the place is. It’s something special that we are all trying to keep going, â€he said.

You can find a full list of shows and make a reservation here.