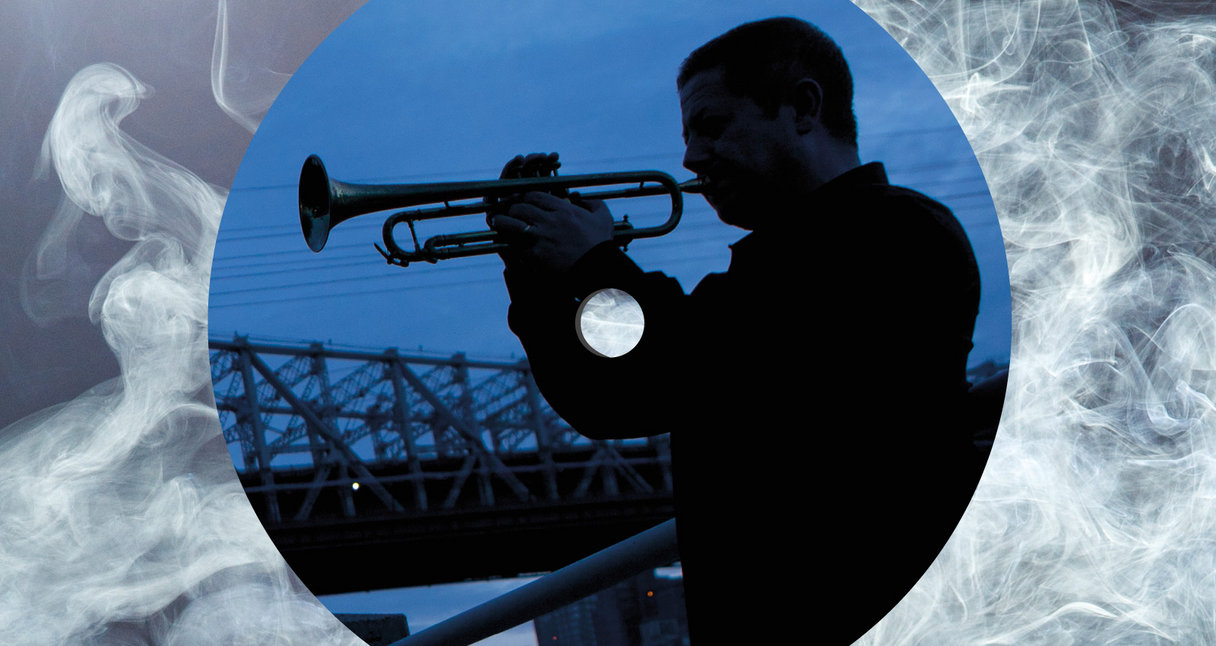 Jazz history is littered with incredible New York club recordings – you can build a solid collection with nothing but albums recorded at the Village Vanguard, not to mention the Blue Note (which has no connection to the label), Birdland, Town Hall, Carnegie Hall, the Jazz Gallery, Smalls, Slugs’ Saloon, the Orient… and the list goes on. But only one venue took it a step further, making the logical choice to create its own label.

Smoke, a small club on Broadway at 106th Street, opened in April 1999. For two decades prior, it was Augie’s Jazz Bar, a venue that featured players working in the hard bop tradition and never charged a minimum cover or drink. Paul Stache and Frank Christopher, the original co-owners of Smoke and the musicians themselves, both worked at Augie’s, and they continued to provide a home for serious acoustic jazz at Smoke while making the club and its adjoining restaurant more top of the line. (The club is currently co-owned by Stache and his wife, Molly Sparrow Johnson.) In 2013, Smoke decided to start recording performances.

“There were a few cross cross [Records] dates that happened at Smoke, and people would come up to Paul and basically ask him to produce records for somebody else,” Smoke sessions recalls label executive Damon Smith. “He’s got a really good ear and an aptitude for sound – he’s directed sound for Smoke, and that’s always been kind of a passion for him. I said, ‘You should do everything, you should just create a label.’ Smith produced jazz records himself independently, also handling marketing and promotion for them. Stache and Christopher convinced him to quit his job to run Smoke Sessions, and they’ve been there ever since.

“Initially, the plan was really to have a lot of synergy between the label and the club,” says Smith. As a result, the first wave of releases – by the pianist Harold Maberalto saxophonist Vincent Herring, tenor saxophonist javon jacksonpianist David Hazeltinand drummer Louis Hayes– were all recorded live. The first exception was a 2014 record by drummer Jimmy Cobb. “There was no opening in the schedule, so we cleared out all the tables and chairs and put Smoke in the studio. Put [guitarist David] Bernstein’s amp in the bathroom…” Soon they started making real studio recordings at Typing sound, with Christopher Allen engineering and Stache production. “We try to encourage everyone to go on a live date, but when you’ve done three, four or five records [for us]probably only one of them is a live date and the others end up being studio dates.

Smoke Sessions artists follow a particular philosophy; in Smith’s words, “Smoke is kind of dedicated to post-World War II music. It’s like bebop and since, you know? It’s definitely African American in origin, but it’s played now by a wide range of people and we try not to be too narrow. It might extend the lore, but it’s not trying to create something out of thin air, like new music that’s not really based on that past. They also have a history with older, more discerning fans coming to Smoke instead of the tourist clubs in Midtown. “We register people who have worked at the club, who have somehow imposed themselves on our local audience. It’s not like we try to discover new talent. Talent is discovered through the club.

These seven albums, from the label’s first release to the latest, show its diversity and the strength of its fundamental aesthetic.

The trio of organists Larry Goldingguitarist Peter Bernstein, and drummer Bill Stewart have been playing together for over 30 years. They debuted at Augie’s Jazz Bar, Smoke’s predecessor, in 1989 and released their debut album, Goldings’ The intimacy of the blues, in 1991. Their music has swing and groove, but they go in unexpected directions and each man has room to stretch. Smith says, “They’re not a totally obvious organ trio from the Jimmy Smith or even Larry Young [lineage]but they’re definitely building on that and extending it, I think.

The first release on Smoke Sessions, Just in time was recorded live in March 2013, when the late pianist celebrated his 77th birthday. It’s a hard bluesy set with John Webber on bass and Joe Farnsworth on drums. “If we have a label, it’s thanks to Harold Mabern. He wanted to make records for us, and he was an artist we really cared about, and we felt lucky that he trusted us to try to release his music,” Smith explains. The energy that Mabern – who hung around the club even when he wasn’t performing – gives and takes away from the audience, makes this a classic live jazz album.

One of the most thoughtful and creative hard bop saxophonists in the history of music, tenor saxophonist George Coleman (who went to high school with Harold Mabern in Memphis, Tennessee) performed with Miles Davis, Max Gardon, Chet Baker, and many others, but rarely recorded as a leader. He hadn’t made an album for two decades when Smoke Sessions took him to Sear Sound with pianist Mike LeDonne, bassist Bob Cranshaw and his son George Coleman Jr. on drums. “George Coleman has recorded some of our favorite records, and he has a long history with Smoke as well,” Smith explains. “He opened the club; he was the first performer there in April 1999.

Orrin Evans and the Captain Black Big Band
The intangible between

Pianist Orrin Evans led the Captain Black Big Band for more than a decade; this high-profile album is their fourth release and their second studio release. “It was one of the most fun dates I can remember,” Smith says. “I mean, taping dates are often fun, but this one was a real party, where [Evans’s wife] Dawn and Orrin brought prepared meals and everyone was hanging out before the pandemic. Evans used a rotating cast of players that included four different bass players (who all play together on a surprisingly gratuitous version of Thelonious Monk’s “Off Minor”) and three different drummers. “Orrin doesn’t like to be tied to a specific style,” Smith says. He likes to draw country influences, R&B influences, rock, soul, whatever. It is quite open. We always joke that he wants to make a national record.

The cooks
The call of the wild and peaceful heart

The Cookers, theoretically led by trumpeter David Weiss, is one of the most amazing all-star bands in jazz today: a septet made up of Weiss and Eddie Henderson to the trumpets; Billy Harper and Donald Harrison on the saxophone; George Cables on piano; Cecil McBee on bass; and Billy Hart on drums. Each man is a leader in his own right and has been a sidekick in legendary outfits like Herbie Hancock’s Mwandishi (Hart, Henderson), Art Blakey’s Jazz Messengers (Harper), and Charles Lloyd1960s quartet with Keith Jarret and Jack DeJohnette (McBee), and they have all written brilliant compositions which they reinterpret together. The title track here is by Harper. “It’s really kind of a set of leaders,” Smith says. “And they get along really well too, which is hard to believe. really like.

Drummer Al Foster has played in all sorts of settings for decades; he first recorded with the trumpeter Mitchell Blue in the 1960s, but was also the drummer for Miles Davis from 1972 to 1975 and again when he returned from self-imposed exile in 1981, remaining with the band until 1985. He is an extraordinarily melodic drummer , and that side of him comes out even more strongly on this album, for which he wrote eleven of the thirteen tracks, dedicating them to his friends and family. He presents a group of musicians much younger than him: the trumpeter Jeremy Pelt, the saxophonist Dayna Stephens, pianist Adam Birnbaum and bassist Doug Weiss. “There may not be a more musical drummer…and you can get a sample of that on this record, because it’s almost all of his originals,” Smith says.

Like Harold Mabern and George Coleman, alto saxophonist Vincent Herring is a living example of the Smoke aesthetic. His hard bop credentials are beyond reproach; he worked a lot with the trumpeter Freddie Hubbardcornet player Nat Adderleyand pianists Horace Silver and Cedar Walton while making over a dozen solo albums. On this album he is joined by musicians heard on some of the other albums on this list: trumpeter Jeremy Pelt, pianist Mike LeDonne, bassist Brandi Disterheft and drummer Joe Farnsworth— for a set of well-chosen originals and standards, including the rocking title track. “I think Vincent Herring is crossing out a lot of criteria for Smoke’s audience,” Smith says. “He’s definitely a tradition-based, harmonically advanced prompter, walking the same path as Sonny Stitt and Cannonball [Adderley], and he hates being typecast. “I played with Nat Adderley, but I’m my own man now.” I think it would be difficult to say that it is not. You can recognize Vincent Herring from a few notes.