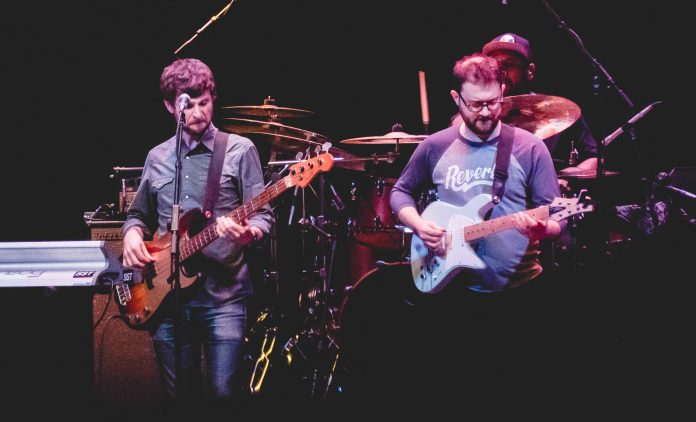 Following their Saturday night performance with the Los Angeles Philharmonic Orchestra, Brooklyn band Snarky Puppy stopped by Santa Barbara on February 24 to entertain another enthusiastic and crowded crowd at the Granada Theater. Despite a busy schedule, the band also stopped by the UCSB campus to bless UCSB’s own student jazz ensemble with a music lesson.

Impressing the world with their collective jazz and funk music since 2004, Snarky Puppy was formed by frontman Michael League and features around 40 musicians who play a variety of instruments including guitar, bass, percussion, strings and bass. keyboard, among others. Recently, they released 12 self-composed music albums and won three Grammy Awards for their innovative and brilliant music.

A theater often used for UCSB arts and lecture events, the Granada Theater was the perfect stage for Snarky Puppy and allowed the lively crowd to fully enjoy the interaction with the band as they performed. . As seats were almost sold out, the crowd shook with an energetic hum as everyone waited for the long-awaited performance before Snarky Puppy stepped on stage.

Without wasting any time, the group immediately embarked on a set of new unreleased music planned as part of their new album, which is scheduled for release on March 15. New music played also included some of their recent releases such as “Bad Kids to the Back” which was released on February 22 as a single. The jazz and funk song contains heavy elements of saxophone and bass guitar.

Between songs, Michael League offered audiences mini trivia and behind-the-scenes stories for each song. Most memorable, he mentioned the filming process for “Bad Kids to the Back”, how it was written by member Justin Stanton, and how it was the group’s first animated music video. Much to the crowd’s delight, he also comically pointed out how the host made the decision to â€œput Justin in high heelsâ€ in the clip.

Towards the end of the show, the band finished their set and left the stage. The crowd, hungry for more, began to sing an encore after cheering. Eventually the band returned and performed their hit song “Lingus”, which is a song with an upbeat tempo that relies on electric guitar, trumpets, saxophone and drums to get the crowd moving.

Overall, the concert did not disappoint. He not only showcased Snarky Puppy’s incredible skills and performance tracks, but also highlighted the group’s dynamic dynamics as a group. The combination of elements of jazz and funk mixed with electronic sounds allowed audiences to hear a new perspective on classical jazz music, which captivated everyone and revealed a playful and adventurous side of jazz.

Continuing to perform and to amaze people around the world, the next stop on Snarky Puppy’s tour is in Osaka, Japan at Club Quattro on April 11. Their new album “Immigrance”, which all their fans are looking forward to, should be released. March 15.

Song recommended by the author: Xavi

Affordable music for the family in New York? Try a jazz club