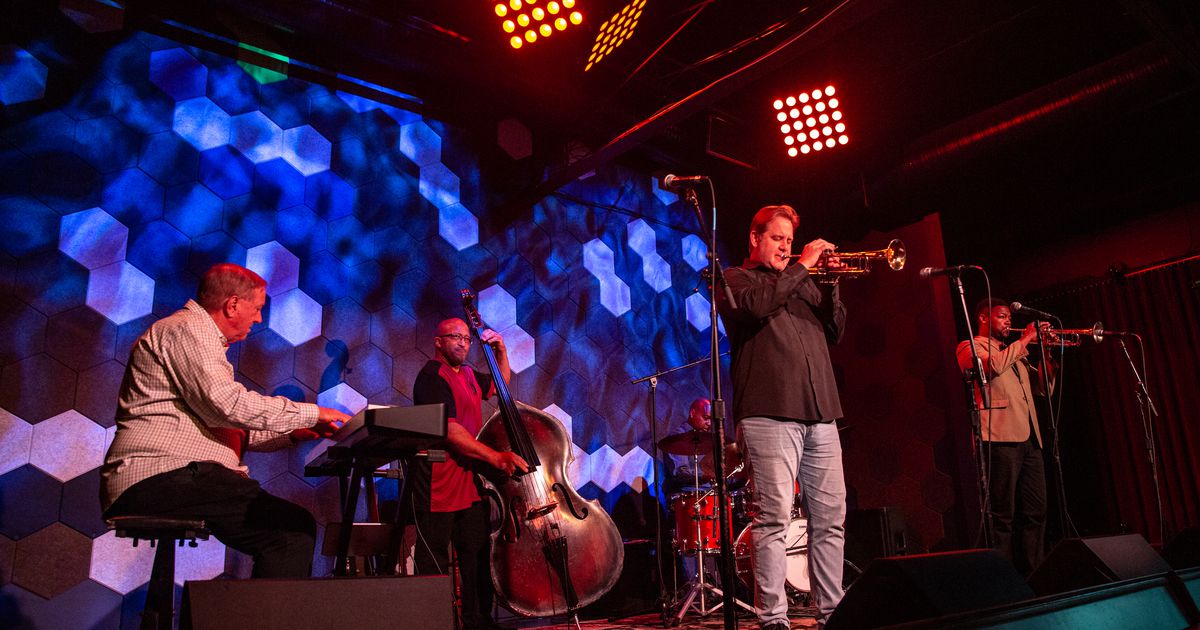 The State of Jazz Music in Atlanta

“There’s a lot of learning that happens with (younger artists) just in the presence of seasoned artists, and also seasoned artists learn from younger artists. This exchange of wisdom, it all happens over conversations about something they all love,” Janice said ahead of the jam session at Venkman’s.

The educational component of Jazz Matters is just as vital as the concerts, as school systems have eliminated music programs, “which were a great source of jazz,” Janice said. “We can’t keep the art form alive unless there are young people in the pipeline coming in.”

Chandler echoes that sentiment. Back then, he says, “you had older musicians taking you under your wing as an apprenticeship, and that doesn’t really exist today.”

Preserving the history of the genre is also essential. There was a time when jazz clubs in Atlanta were open late into the night and musicians could jam any day of the week, Edwin said. He believes keeping this history alive is key to making jazz more important in Atlanta.

Ticket stubs to a 1947 Duke Ellington and Earl Hines concert and a 1937 show with Ella Fitzgerald and Chick Webb are among thousands of memorabilia from Atlanta’s jazz past that James Patterson, 86, has collected over the course of his life.

An associate professor of music and director of jazz studies at Clark University in Atlanta, Patterson is one of the few jazz greats who still remembers the Atlanta jazz scene of the 1950s and 1960s. jazz studied at Clark with Wayman Carver and since 1968 has led the university’s jazz orchestra, which has performed with such greats as Dizzy Gillespie, Jimmy Heath, James Moody, Wynton Marsalis and Ellis Marsalis.

“Jazz was so tied to the growth of Atlanta and the civil rights movement,” Patterson said. “The scene was as rich as New York or Chicago.”

Among the first big names in jazz to debut in Atlanta was Fletcher Henderson. The pianist, composer and bandleader was one of the most prolific jazz arrangers who helped launch big band and swing jazz.

Many of those who shaped the genre trained at Clark College, including pianist Duke Pearson, who recorded with hard bop saxophonist Cannonball Adderley and trumpeter Donald Byrd, and who would later influence pianist Herbie Hancock. Pearson composed standards like “Jeannine” and worked with the Blue Note jazz label while collaborating with Atlanta’s jazz pioneers.

Musicians performed at venues such as the Magnolia Ballroom, the Waluhaje, and the Top Hat Club, where Cab Calloway and Louis Armstrong performed. When the latter club closed in 1949, it reopened as The Royal Peacock, hosting performances by Aretha Franklin, Ray Charles and James Brown.

The Royal Peacock has also served as a meeting place for civil rights leaders including Martin Luther King, Jr., Andrew Young and Hosea Williams. So was Paschal’s La Carousel, which was Atlanta’s only nightclub to host black, white, and LGBTQ musicians when it opened in 1960.

Saxophonist Joseph Jennings, former director of the Spelman College Jazz Ensemble, said Atlanta’s jazz community helped bring the city together by bringing together white and black musicians. He recalled that when he arrived from Illinois in 1970, some clubs in Buckhead would not allow a black musician to perform without a white musician present.

“Clubs ended up breaking that up, but that was it,” Jennings said.

Musicians of all races played in Underground Atlanta, however, which from 1969 became a jazz mecca in the city thanks to clubs like The 12th Gate and Dante’s Down the Hatch before moving to Buckhead in 1981.

“To me, Dante was like a laboratory,” said Edwin Williams, who played there for 23 years. “It was a refining station where you could sharpen up. Six nights a week, five sets a night for that duration, you got chops, that’s all there is to it.

In addition to clubs, Atlanta has a rich history in jazz festivals. Jennings, who formed the jazz ensemble Life Force with fellow saxophonist Howard Nicholson and taught saxophonist Sherman Irby, helped organize a festival in Mozley Park in the 1970s. He said it was a precursor to the Atlanta Jazz Festival, which began in 1978 and continues to this day. Artists who have performed include Lionel Hampton, Wynton Marsalis, Nina Simone and Herbie Hancock.

During the 1980s and 1990s, various factors, including rapid construction and changing musical tastes, led to the closure of many long-running clubs, including nearly every jazz club in Atlanta of the 60s.

But then a ray of hope appeared. Churchill Grounds opened in 1997 next to the Fox Theater with jam sessions led by trumpeter Danny Harper and his wife, singer Terry Harper. With its location on Peachtree Street in the heart of Midtown, the club has become the city’s premier jazz spot.

Joe Gransden, the trumpeter, vocalist and big band leader who is one of Atlanta’s hottest contemporary jazz musicians, developed his chops at Churchill Grounds. When the club closed in 2016, the community was shaken.

It was a struggle for musicians to find a place to play. Some have played jazz with the Atlanta African-American Philharmonic Orchestra. Gransden has found venues throughout the metro area to play one night here, one night there.

Cafe 290 in Sandy Springs was still operating, but the pandemic eventually shut it down.

Laura Heery, an Atlanta architect, moves to the music of the Wednesday night jazz jam at Venkman’s. Her grandfather played stride piano, she said, and she has fond memories of her mother taking her to see guitarist Wes Montgomery at the Atlanta Jazz Festival as a child. What she calls “common denominator music” floods her with decades of memories.

“There’s something about the history and the way jazz touches me that touches a lot of us, so when everything is so new it takes us back to another time,” she said. .

“Places like this mean the world to the music scene, giving us a place to continue to play and grow as musicians and have the chance to not only hone our skills and craft, but also meet new people. other musicians and collaborating with other people,” said Harper.

And Venkman isn’t the only one. Jazz jams also occur at TEN ATL in East Atlanta Village, Red Light Cafe in Midtown, and St. James Live in South Fulton.

The jazz scene still has a long way to go to regain some of its former glory, but Gransden is hopeful. All it takes is a few more club openings and a bit more programming.

Michael Cruse, an Atlanta-based trumpeter who trained in New York and Chicago, agrees. Cruse teaches at Emory University, does outreach at Atlanta Public Schools, and performs with various ensembles across Atlanta.

“We’re going to get there anyway, regardless of the obstacles in front of us,” he said. “It’s really a testament to the scene’s focus and focus on community. Just because we don’t have one home doesn’t mean it’s spread all over the city and that gives more opportunities to everyone, not just a few people.

It all comes down to Edwin Williams’ mission with Jazz Matters to embrace the history of the genre and share knowledge with the next generation.

“The greatest legacy you can leave behind is the knowledge you pass on to someone else, and this music will live on forever because of its ability to teach,” Harper said.

“I hope this person grows into an amazing musician and performer, but also teaches about preserving music history.”