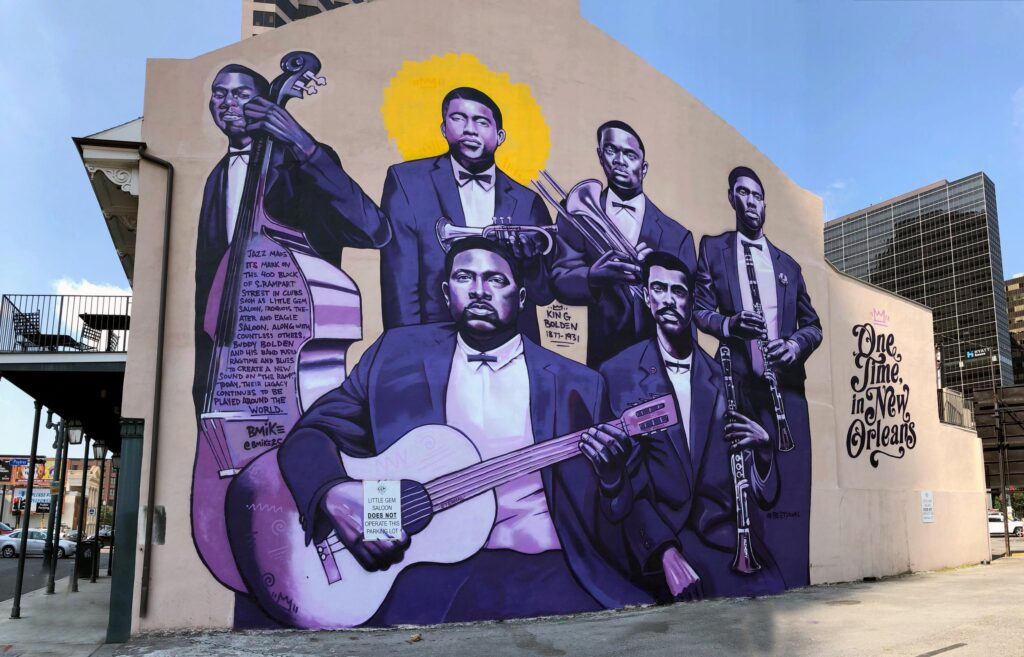 Where to listen to great jazz music in New Orleans

There is no place in the world like New Orleans. This is where the fresh water of the Mississippi meets the salt water of the Gulf of Mexico in one of the country’s largest ports. This is where the Spanish, French and British flags once flew. This is where dozens of immigrants landed on the first leg of their journey to the United States – and where many have stayed. Everything about the city – from the food and architecture to the celebrations and the culture – is the result of a blend of influences, influences that have marinated together for generations to produce a unique style.

This is especially true for the music of the city, especially the genre unique to New Orleans: jazz.

Shaped from African rhythms and European chords, the innovative musical improvisation we call jazz originated in New Orleans over a century ago. Many of its geniuses – Louis Armstrong, Jelly Roll Morton, and Sidney Bechet, among others – were born and raised in Crescent City and honed their jazz skills there.

New Orleans is understandably proud of its jazz heritage, and hearing this music live should be a part of every trip to the city. Here are some of the best places to have a drink, watch a concert, and marvel at the magnificent complexity of this music.

Founded in 1961, this legendary French Quarter venue offers some of New Orleans’ finest pure jazz in a stripped-down yet historic setting. The Preservation Hall Jazz Band performs here regularly; he is well known for his Coachella appearances and for his collaborations with artists like Elvis Costello, Foo Fighters and The Black Keys. The Preservation Hall Foundation provides mentorship to young musicians and helps preserve New Orleans’ jazz tradition.

The venue is open every evening, with one-hour sets at 5, 6, 8, 9 and 10 p.m. It’s a rite of passage in New Orleans to stand in line to enter this sacred hall, so arrive 30-45 minutes before your favorite show and be prepared to queue for an experience well worth it. ‘wait. General admission, standing tickets cost $ 15 to $ 20 and limited reserved seating starts at $ 35.

Another old-fashioned jazz joint worth checking out is Fritzel’s European Jazz Pub on Bourbon Street. Like Preservation Hall, it has been in existence since the early 1960s and occupies a historic building in the heart of the French Quarter. It’s an intimate – maybe even cozy – setting, with a variety of bands and artists performing every night. There is a minimum drink, but no cover. If you want a seat make sure you get there early. Also be prepared for the inevitable impromptu dance party that is sure to explode!

The Little Gem Saloon, located in the CBD, was completely renovated in 2012. The first floor now serves as the main concert hall, while the Ramp Room on the second floor hosts private parties. The Little Gem is the perfect place to grab a bite to eat: its kitchen serves delicious Creole dishes for lunch, dinner and Sunday brunch. There are plenty of cocktail offerings to go with both the food and the great music. Word of the wise: Little Gem also has a killer happy hour. Table reservations are strongly recommended and concert tickets can be purchased separately.

For a little chic with your jazz, stop by the Davenport Lounge, located at the Ritz Carlton on Canal Street just outside the neighborhood. From Wednesday to Saturday, this upscale venue named in honor of trumpeter and headliner Jeremy Davenport swings to the sound of standards. The cocktail menu is both cultivated and refined. Shareable offers include Cajun-inspired classics: crayfish toast and grilled andouille are both on the menu.

Snug Harbor, a quick cab or Uber ride downstream from the neighborhood, is tucked away in the predominantly residential and history-steeped neighborhood of Faubourg Marigny. For more than 30 years, the Snug has offered jazz and New Orleans cuisine in a renovated storefront. Local, regional and national artists perform here, and like other jazz clubs, tickets must be purchased separately from table reservations. Performances take place seven nights a week and feature programming that feels like a who’s who of jazz: Kermit Ruffins performs here regularly, as do Ellis Marsalis and Charmaine Neville.

You’ll want to make it to Uptown at least once during your visit to New Orleans to experience stately homes, grand cafes, and the famous Maple Leaf Bar. You might just hang out with a celebrity at The Leaf; Bruce Springsteen once surprised the crowd by sitting down on a platter, and Bonnie Raitt did the same. It is not uncommon to see the crowd pouring into the street during a set; that’s why the Leaf offers live broadcasts of its nightly performances on its website. It’s such a hot spot that the Uptown Mardi Gras krewe starts there and ends its annual parade there. The bar has been mentioned by many writers and poets in their work – it truly is a New Orleans institution. Visit yourself to see – and hear – why.

Tipitina’s (or Tip’s, as the locals call it) is another tried and true place in Uptown where you can experience live jazz. It opened on rue NapolÃ©on in 1977 to allow famous pianist Professor Longhair to perform in his later years. The club is named after her song “Tipitina” and has hosted some of jazz’s most iconic names over the past four decades, including Dr. John and the Neville Brothers. National artists spanning all genres, including Pearl Jam, Bonnie Raitt, James Brown, and Willie Nelson, have also performed at Tip’s.

Tipitina’s houses a foundation dedicated to supporting local musicians; its main purpose is to supply instruments and uniforms to the many talented bands of New Orleans high schools.

Fun fact: When it first opened, Tipitina featured a juice bar. The juice bar is long gone, but the banana in the club’s logo is a constant reminder of its existence.

Jazz brunch at the Commandant’s Palace

Weekend jazz brunch is a New Orleans tradition, and there’s no better place to experience it than the legendary Commander’s Palace. Internationally known and hailed for its gourmet and refined interpretations of Creole and Cajun classics (the restaurant regularly wins James Beard awards), Commander’s is located in Uptown, a short tram ride from the hustle and bustle of the neighborhood. The restaurant has existed since 1893, and it is still the place to see and be seen in New Orleans. Famous for its turtle soup and Creole bread pudding soufflÃ©, as well as its stunning wine list and handcrafted cocktails, the Commander’s weekend brunch also features live performances by a jazz trio. Reservations are required and there is a dress code: this is not a place to casually discover an ensemble. But for a truly upscale experience of the city and the music that first took hold, there is nothing better than Commander.

Want to listen to some of the best names in jazz, rock and funk along with tens of thousands of other music enthusiasts? Plan your visit around the New Orleans Jazz & Heritage Festival, which takes place each year on the last weekend in April and the first weekend in May. Jazz Fest began 50 years ago and takes place today at the New Orleans Fair Grounds racetrack. Performers at the festival included Eric Clapton, Santana, Stevie Wonder, Jimmy Buffett, Bob Dylan and the late Aretha Franklin.

The fairgrounds are huge, and it’s a bit far from the neighborhood and Uptown, but all that terrain is needed to accommodate the dozen or so stages featuring jazz, blues, zydeco, and gospel music. Then there are all the craft stalls, food tents, and bars to check out. Bring a blanket and sunscreen, grab a piece of crayfish bread from one of the vendors, wash it with an Abita and let the good times roll!

There’s a place where you can hear some of the best jazz in the city with no entrance fees, minimum consumption, or ticket. From young people working to refine their chops to old jazz cats whose stories are steeped in this music, jazz performers abound on the streets of New Orleans. Take a walk around the neighborhood at almost any time of the day and you’ll hear street musicians or bands around the corner. Sometimes you’ll see them near St. Louis Cathedral or performing in the pedestrianized Royal Street Mall. No matter where you hear them, know that you are approaching jazz in its original form. This ubiquitous music originated on the streets of New Orleans, and the street is still one of the best places to catch it today. Stop, listen for a while and enjoy the rich jazz tradition that has been passed down for generations. You will not regret it.