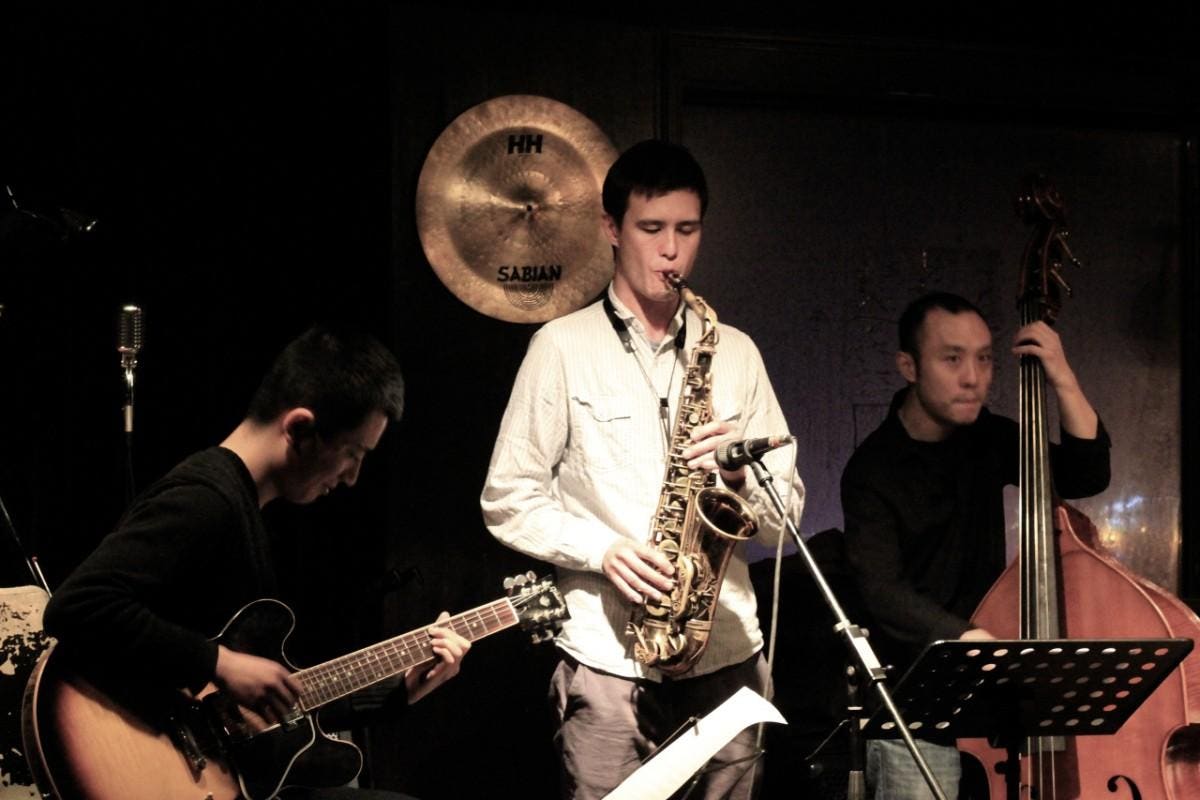 Why Beijing is (still) a great city for jazz music

Beijing’s underground music scene has been heralded as the epicenter of creativity in China: you can find everything from dark noise to grunge, rock, hip hop and avant-garde Jazz. Lately, however, I’ve had the feeling that people believe Beijing’s music scene is dying, for lack of a better word. The LA Times’ Jonathan Kaiman credits the closure of venues and festivals and the denial of visas to President Xi Jinping’s anti-foreigner campaign, citing reports of increased pressure from local artists and venue owners to affirm the state-led pro-socialist movement.

I’ve been a jazz musician in Beijing for almost four years now, and it’s hard for me to see the scene as “dying” here. In fact, I’ve had the privilege of seeing and sometimes even playing with some of Beijing’s most amazing jazz headliners in recent years: The Yellowjackets, Herbie Hancock, Kurt Rosenwinkel, Robin Eubanks, Jaleel Shaw, Snarky Puppy, Richard Sussman to name a few.

Ami Lee, editor-in-chief of City Weekend Beijing, recently published an op-ed criticizing the ‘decline story’ that has been used to describe the art scene in Beijing – that is, it’s practical to conclude all the closings of places and festivals, arrested artists, deportations and canceled concerts in this simple idea that the political forces are angry with the music scene in Beijing.

This notion of convenient narrative is important for better understanding Chinese society. First, it highlights a double standard against Chinese artists: that they are (or should be) eternally locked in a black-and-white struggle against the iron fist of the Communist Party, although this expectation does not exist for Western artists. artists. Second, this narrative ignores the growing financial pressures on venues and artists in 2016: rising rents, an aging artist population, and skyrocketing background costs like food and drink.

That aside, political forces have always played a role in determining how big shows or festivals with international acts are allowed to take place, here in China. In 2008, Bjork got banned for performing his song “Declare Independence” and shouting “Tibet! Tibet!” and even jazz icon Harry Connick, Jr. was barred from playing with his band due to an unapproved set list.

“The main difference now, I think, is just that music festivals are getting harder and harder to organize, and I guess more and more bands from overseas are getting cancelled, but that’s different from the local scene,” says Nathaniel Gao, a jazz saxophonist who has been in Beijing on and off for 10 years now. Indeed, it is important to separate the politics involved in the reservation from international acts, which ARE decidedly political; and the local scene, made up mostly of musicians living and working in Beijing, who practice their own art, most often independently. For the most part, art politics remained largely outside the local scene, with a few notable exceptions. There’s crossover, especially when it comes to these big festivals, but for the most part artists are free to do whatever they want. I recently saw an album released by a rapper known as MC Da Wei in which I heard him deliver some of the most scathing political criticism to date, at a club called DaDa.

Let me bring this back to what I know best: jazz. Jazz musicians have a special place at the music table in Beijing: we are largely ignored by both expats and the music community in general. Perhaps it’s the lack of accessibility to the music we play: listening to jazz performances is difficult, especially if you’re unfamiliar with the conventions of the music. Perhaps it’s the lack of stereotypical behaviors that people expect from jazz musicians: you won’t find the musicians here doing drugs, rowdy or doing crazy performance art on stage. , like the historical tropes of jazz. But maybe it’s also the lack of visibility: while the gigs we play are advertised in magazines and websites, they’re not easy to find, often hidden away in the back section of weekly events, if at all. at all printed. What I mean is not that we are neglected, but rather that the jazz scene here is made up of a small but growing group of Chinese and international instrumentalists who are dedicated to producing creative instrumental music in the tradition of jazz despite being paid the equivalent of $50 a night or less.

There’s creative jazz music happening almost every night of the week in Beijing: from jam sessions, where musicians gather to play jazz standards and talk shop and network, to international headliners, where musicians world-renowned artists come to share their art with the community. Last week, New York saxophone legend Antonio Hart, who spends time in China every year, joked after a workshop at Beijing’s East Shore Jazz Cafe: “Beijing cats don’t mess around!”

Scott Sawyer has been drumming in Beijing for almost as long as rock and jazz music has existed here. “From a jazz scene perspective, it’s far from dying,” he says. “I would say if anything, it’s thriving more than ever: we’ve got these new places opening up, although some of them are coming and going, and I’m not aware of any political pressure being put on the scene If anything, the scene is thriving and growing more than ever, but it just doesn’t get the attention that a lot of other things do.

There is also a sense of authenticity that resonates with many musicians here: “There is a strong sense of Chinese culture and authenticity in Beijing, being a foreigner here is really what the you feel,” says Anthony Vanacore, a drummer from New York who has been in Beijing for only a year. Traditional Chinese melodies seep into the jazz idiom: musicians like guitarist Liu Yue and pianist Xia Jia have written modern jazz arrangements that include such melodies, reharmonizing and reworking them for a piano trio with bass and drums, and even with horns and traditional Chinese instruments.

But above all (and concretely), there seems to be a community in Beijing that is forming around jazz music – a community that doesn’t necessarily exist in other music scenes elsewhere in China. Every Tuesday, a crowd of jazz musicians descend on the jam session at the Jiang Hu bar, an old traditional house with a courtyard converted into a performance hall. It doesn’t feel like a New York session where the musicians are there to prove a point and challenge each other, but a place where people try out new ideas, patterns and concepts that they’ve practiced on their own, set to jazz standards . with a live band. Sometimes there are a lot of people. Other times the house is practically empty, but the band plays anyway. Despite making around $30 a night, you’ll find the same guys coming back week after week. Do they need money? Probably, but they are also there for the musical work. This perhaps suggests that a creative music scene can exist not just in spite of, but because of, a general lack of support. When you can make a lot of money playing a particular style or even a particular song, it can affect your aesthetic judgment. In other words, it allows us to keep the essential…the art–the main thing.